Menu
Menu
COOPER LANDING – Of all the tours, Alaska has been one to really test my fortitude. The cool temps have been a challenge (lots of changes out of sweaty clothes to stay warm in 50-degree temps) as well as the hilly terrain.
It’s the people and the conversation therapy that have helped….. along with the Green Bay Packers.
After a tough day at the office Wednesday I pulled into my destination city of Cooper Landing. It was no easy feat.
Holiday traffic combined with road construction made for a dicey situation, especially since there was no shoulder on the two-lane road. I mean none. There was nothing to ride on.
There were hand-painted signs, ‘Cooper Landing Drives 35.’ They were placed about every half mile. I must have been the only one to see them.
Bucking biker safety code, I crossed the road and faced oncoming traffic.
That was a good idea – said nobody, ever.
The cars didn’t like it, but at least I could see what was coming.
About 4 miles into town I pulled over at a construction site to determine what wizard laid out this plan. Granted I was tired, hungry and frustrated and I already felt sorry for the person in the trailer.
That’s where I met Donny. Sitting alone, counting the minutes until he could start his holiday and he was forced to deal with this.
He totally disarmed me by smiling and then agreeing with everything I said. 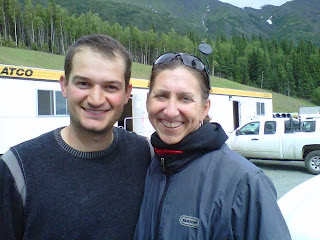 This was a state project and plans had been in the works for more than 40 years to add a small shoulder or path or bike lane – it just never got done.
I fumed some more, Donny responded with a smile and the understanding of a therapist. He knew my rant in a biker helmet and spandex was just a natural outpouring of stress.
On to Plan B, which was to ask Donny if I could sleep in his empty construction trailer for the night. The fact it was a state trailer didn’t dissuade me; I just needed a floor and a roof and a locked door.
No go, and I knew it going in. Donny assured me I’d find something – he also advised me to stick to walking my bike on the side of the road.
Very disheartened, still tired and not happy, I walked 50 yards up from the construction trailer and right into a mailbox post with a weathered old cheese head on top.  There was also a small, faded Green Bay Packer flag attached to the pole.
I felt like I’d struck gold.
Making my way down the driveway, I find this guy in headphones and mowing the lawn in a Packer sweatshirt. It was Rick.
We chatted at length about the Packers, how he got to Alaska and where he was from.
Born in St. Cloud, Wisconsin and a 1977 graduate of New Holstein High School.
What are the chances?  My dad was born in St. Cloud, grew up in the Holy Land and was also a graduate of New Holstein High School.
This was a winning opportunity for me and that’s when I hit Rick with the request to throw my bedroll down in his garage for the night.
Rick made the official decision – – to go get his wife. 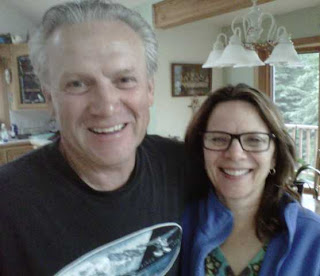 Rick and Mary
After some front-porch conversation Mary agreed – but she said they had a cabin by the lake and I would be more comfortable there.
Plus, I didn’t learn until later, I was treading on some pretty thin ice – asking to sleep in the man cave. 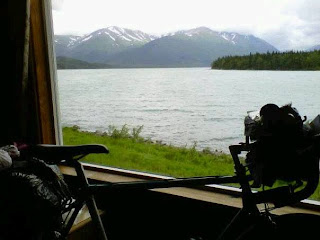 What gracious hosts and an awesome place!
Next morning Mary and Rick fixed a breakfast of eggs, wheat toast, blueberries, and hot coffee. 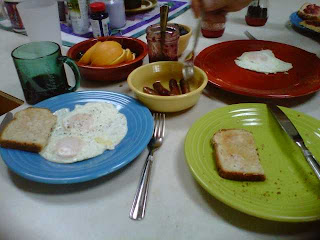 Mary designed their house. “I wanted a big kitchen because when you have family over they always end up in the kitchen,” she said.
Mary also had a flair for orchids; a beautiful soft purple orchid rose from the center island in the kitchen and a white orchid flowered in the kitchen window.
Mary graduated New Holstein the year after Rick. They were high school sweethearts that moved to Alaska more than 25 years ago. “I think there are about seven couples from New Holstein that live out here,” she said.
Rick worked for the phone company and Mary was a caregiver to a 91-year-old woman who lived five miles down the road.
The couple had grown children, a daughter who was a nurse in Denver, CO and a son who served in Afghanistan and Iraq and was now living with his wife in Idaho.
“I remember going to a Rolling Stones concert at Milwaukee County Stadium,” reminisced Mary. She also vaguely remembered all-things-Fond du Lac, including The Mad Hatter record store, Joe’s Fox Hut, and Walleye Weekend.
“Rick still has his turntable and records in the garage,” said Mary.
After a busy breakfast, picture taking, route confirmation and goodbyes, we also determined my cousin, Donny Hammer, was in their class in high school.
How odd to find neighbors 3,000 miles away from home.