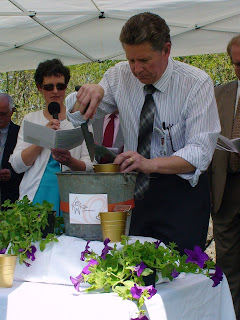 WEST BEND – Jim Williams, Director of Operations at Cedar Community, mixes soil from each of the Cedar Community campuses during a blessing of the ground ceremony held this week at the Paul Ducharme farm.
The half-hour, outdoor ceremony marked the beginning of the development of Cottages at Cedar Run, a 60 apartment assisted living memory-care complex located south of Cedar Ridge and bordered by Ridge Run County Park.
Rev. Kathryn Kuhn gave the Prayer of Blessing and then members of Cedar Community and the Foundation offered words about the soils from Cedar Landing that invite us “to trust and persevere” and the good earth from the grounds of Cedar Crossing that “yield greater good to all.”
Some in attendance included Cedar Community resident Marilyn Zimmerman, Dale Pauls – President of Cedar Community Corporate Board of Directors, Dan Davis with C.G. Schmidt, and Honorary Chairpersons Doug and Sharon Ziegler.
“This is one of the best things that’s happened in a long time,” said Sharon Ziegler, praising the development.  “This memory-loss facility puts us up on the next tier as a community,” she said. “It’s a beautiful setting, people will have sun rooms and they’ll be able to look out onto nature. The Cedar Community Foundation Board is a class act with all the research they’ve done on what these people will need.”
Debra Meinert’s family knows firsthand the demands of caring for a family member with Alzheimer’s. Her mother is 88 years old and a resident at Cedar Community’s Friendship House, an Alzheimer’s-Dementia unit on Highway Z.
“My mother lived in the big six bedroom farmhouse for 68 years and it was very hard for us to move her there but the stimulation, love and care she receives is just wonderful,” said Meinert.
“Our prayer now is when the Cottages open mom can be part of that.”
Construction of the Cottages at Cedar Run will be in two phases with a pair of 20-unit buildings completed in summer 2014; the final 20-unit building will be finished depending on market demand. 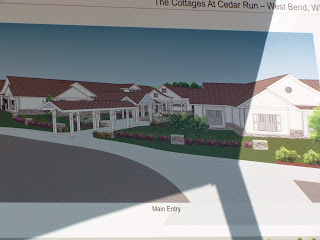 The general contractor is CG Schmidt of Milwaukee and the architect is Plunkett Raysich of Milwaukee. The estimated cost of the project is $13 million; a philanthropy campaign is underway to raise approximately $3.7 million for programming.