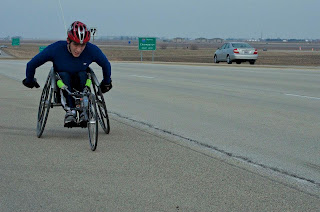 WEST BEND – The mother of 2012 West Bend East High School graduate Trey Roy is still trying to wrap her head around reality in the aftermath of Monday’s tragedy in Boston.

Chris Roy’s son Trey was one of the wheelchair racers at the Boston Marathon.

“He called me as soon as he got home, 3:30 a.m. Tuesday, to his dorm at the University of Illinois,” said Chris Roy. With a long pause, a deep breath and a sigh she continued. “It’s the first time I actually got to talk to him.”

Trey Roy, 19, is a freshman and the youngest member of the Illini Wheelchair Athletics Program. He, along with 14 of his teammates, were in Boston.

In a marathon the wheelchair division typically starts the 26.2-mile race well before the runners. Trey Roy finished in a time of 2 hours, 15 minutes and 14 seconds. He was off the course by 11:30 a.m. and at the Sheraton Hotel restaurant, two blocks from the finish line, eating lunch when he first heard the news.

“I didn’t feel any of the percussion but the restaurant manager came on the P.A. and said there was criminal activity on the street and I saw countless ambulance and fire trucks racing past,” he said.

Back in Wisconsin, Chris Roy watched the race via a broadcast on the Internet; she had taken her personal computer to work.

“Not much of the wheelchair race was shown,” she said. “They did have live updates so I could at least keep track of where he was and how he was doing,” she said.

Chris Roy said she didn’t know about the explosions until she returned to her office later that afternoon and saw several voicemails from her husband.

“First thing he tells me is that Trey’s OK and then he said there had been explosions and I kind of lost it,” she said.

“It was almost like I didn’t hear the part that he was OK, because even if he’s OK, it’s complete chaos and you don’t know if there’s more bombs and he’s still there in the city; it’s just very frightening.”

Chris Roy immediately began working her cellphone. “The service was so bad, we just kept texting. He was pretty worked up and scared too, although he wouldn’t admit that to me,” she said.

Although the family was back home, Trey Roy was with his coach Adam Bleakney.

“I was just sending the team an email thanking them for their cooperation, being patient and responsive,” Bleakney said Tuesday afternoon.

After receiving word of the tragedy, the team pulled together in the lobby of the hotel and Bleakney told them not to move. “I wanted to be ready to go immediately when we got a sense we’d be able to catch a shuttle and get to the airport,” he said.

A tweet from @IlliniWCA was posted within an hour of the incident: “Awaiting a final confirmation, but it appears that all of the members of the elite wheelchair division are accounted for following the 2013 Boston Marathon. Our thoughts and prayers to all involved.”

The team’s departure flight out of Logan International Airport to Chicago O’Hare wasn’t until 9:30 p.m. Monday. Bleakney credited his support staff for helping with logistics and gear, considering every athlete travels with their personal wheelchair and a racing wheelchair.

Trey Roy was still in his dorm room around noon, feeling “totally drained both physically and emotionally.”

“I’m not too sore, but that was a tough course and I have no energy,” Trey Roy said.

Questioned about the impact of the bombing, Trey Roy said, “I really can’t watch it (on television) because it’s scary-strange for me.

“My thoughts and prayers go out to all the people affected by the bombing; I hope Boston recovers quickly.”

At home in the town of Jackson, Chris Roy took off a half day from work — still numb with the news.

“I take it the worst,” said Chris Roy. “I’m the one that’s been sitting in the hospital with him through all of his surgeries and we have a pretty tight bond. I just take these things worse than everybody else.”

Asked whether the family had plans to go to Champaign, Ill., Chris Roy said no, but, “I expect we will be making some sort of trip this weekend. Mom needs a hug.”

West Benders will remember Trey Roy at 16 as a sophomore taking home three first-place medals in 2010 during the WIAA State Track and Field Tournament in La Crosse. The West Bend Common Council and Mayor Kris Deiss issued a resolution recognizing Trey Roy for his accomplishments that season.