Menu
Menu
July 1, 2017 – Den Hague, Netherlands – A full day of museums under my belt and I was pushing to move along and get out of Den Hague.

Beautiful city in Holland but busy with lots of shops, narrow cobblestone streets and lots of traffic.
I have a physical map, the trusty Google map on my iPhone and the names of the streets on the side of buildings…. sometimes I still get twisted around.
I’m sure the construction worker in a brilliant reflective yellow vest knew I was confused when I pedaled past him five times in a span of three minutes.

But.. I’m getting better and yes, I know I said that yesterday, or was the day before.
One of the benefits of being directionally challenged is the people I meet.

I was south of Den Hague looking for a campsite in Monster. I found Kaas sitting on a bench and bothered him with my typical introduction. “Little English?”

He took a look at the map and we chatted. We were soon joined by his son-in-law Simon and his sick dog Hines. 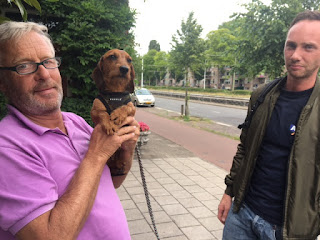 On a good day Hines would have been barking at my heels and holding me to attention. Today, not so much.

Kaas cradled him and stroked his ear. Simon later took him home and Kaas and I talked about the bike tour and Alzheimer’s.
He relayed his battle with Parkinson’s and how the stress of a broken heart with his wife leaving made it that much worse.

In the horizon, the thought of a grandson in November was giving him something to look forward to. 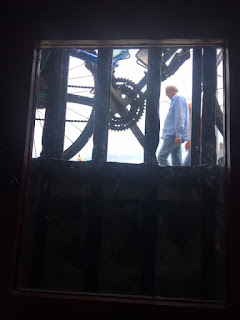 My bike sitting in freedom outside the Prison Gate.

The alcove entering the Prison Gate. 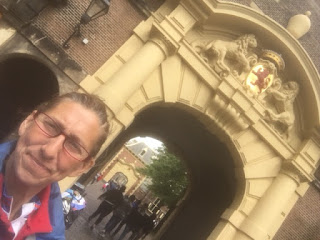 The entrance to city hall.
The Hague City Hall is a library and city or town hall
that was built from 1990 until 1995. 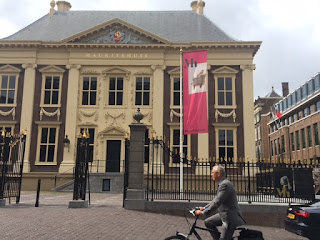 Mauritshuis museum with the painting of “The Girl With the Pearl Earring.” 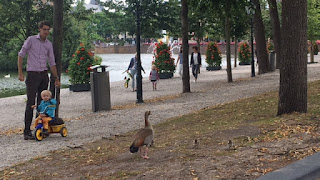 Child and father watching baby ducks in the park.