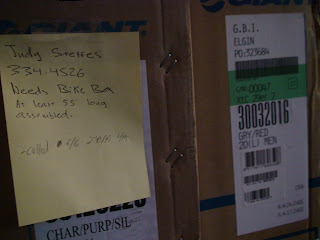 I ran my typical pre-tour scenario this week and pretended to leave on Friday – although I really fly out next Friday. Surprisingly – I wasn’t ready.
I mangled one of my bike boxes and had to get another. The TSA lock I got for my gun case didn’t fit, my ATM numbers don’t work, I can’t find my plastic map case and at his rate I’m starting to wonder how I’ve managed to get through the past few years of life.
It’s 4:16 p.m. Saturday afternoon and I seriously need to buckle down and started packing. I have to really focus, categorize my gear. Making some space on the floor in the living room I moved my bike-tour photo album and was slightly distracted for a little more than an hour reliving past adventures.
I roll my eyes at some of the ridiculous things I’ve done and sigh at what a nut job I am – although my friends think I’m cool. 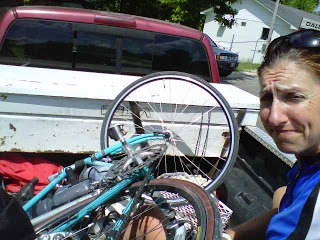 One of the few less-than-cool adventures when I hitched a ride and sat in the back
of a pickup. “This is why nobody wants to come with you,” said a friend.
5:19 p.m. – Back on task. I’ve paired down my tools to just the essentials. Plastic tire irons, (which is an oxymoron); allen wrenches, inner tube repair kit, pliers, and a zip-lock bag of nigeldy stuff like screws, spoke nipples, and chain links. 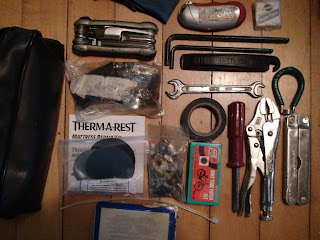 5:42 p.m. Tried to space out where to safely place my cash money, spare credit card, ATM card, and emergency numbers. You can only stash so much on yourself, the bike, and the gear. I try to be very Dick Tracey – I roll up $20 and pull off the plug at the end of my handlebar and slide some money in a plastic bag up the tube. Then, to best transport some spare parts, I tape extra spokes to the frame by the back wheel. 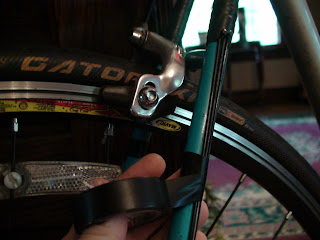 7:05 p.m. Had to run to Menard’s for another TSA lock. I downloaded instructions off the Internet on how to safely travel with a gun. Having a copy of the rules in hand when checking in at the airport was the number one key to success. The other, is to have a Plan B. So, even though I’m concerned about the weight of everything I’ll have two locks. Another key was to take a photo of the gun and box and download that to a thumb drive along with the registration number and having my name and cell number written all over the case. 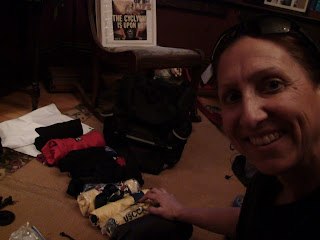 7:13 p.m.  Some Martha-Stewart insight on packing. I tightly roll my clothes instead of folding them. It’s more efficient that way. I have two panniers – read: luggage carriers for a bike. The panniers hook on to a back rack. I don’t carry much, six tour jerseys – which is a lot but I only plan on wearing three and I’ll give away the others to people who help me on tour. I have three black padded bike shorts, three socks, three sport bras, spandex pants and a heavier long-sleeved shirt, a sleeveless jacket and biking shoes. I’m also planning what to wear to the airport – so I’ll set that aside. An interesting note – I hook safety pins to every zipper on my gear. It’s an old Indian trick. 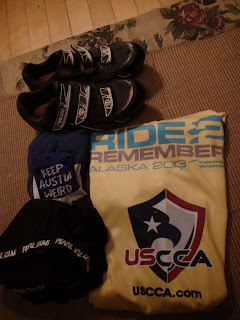 This is my daily uniform – jersey, shorts, socks, sport bra and shoes
The bicycle fashion handbook says NO to underwear with Spandex shorts.
7:58 p.m.  Not really sure about the safety-pin thing really being an Indian trick. But it makes for a good story and because I’m rather well traveled, people buy it. I make sure some of my electronics are working and this time I’m traveling with the power cords. Last time I packed them with my clothes when I went to New Zealand. When my gear went missing for 26 days – I struggled coming up with a way to power up and still file stories on deadline. 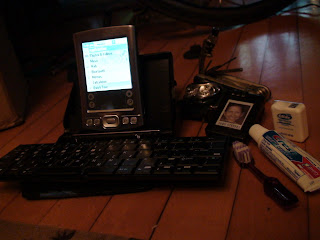 8:21 p.m. Had to run out again for something. Berated myself for having to make another trip – just not efficient. But, then I told myself to relax – I was going on vacation soon. I listened to my laid-back self and bought a Powerball ticket. An extra $125 million would be a nice thing to fall back on this tour. Returned to home base and packed my utility kit – which is a mini-me version of toiletries like a 3 oz. bottle of shampoo, a dinky box of dental floss, razor, some random Band-Aides, Neosporin, a tiny tube of Crest and I’ve cut the handle off my toothbrush and trimmed it to just 2 inches of business. Seriously it’s all about the weight. 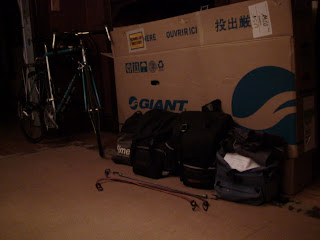 9:30 p.m. I’ve cut one bike box in half, lined up my tent, sleeping bag, and new Cabala’s air mattress (which is about the size of a travel coffee mug). A fresh roll of Duct Tape will be on standby until Friday. I’ll take black marker and tag the box tomorrow.
10:41 p.m.  Weary – but now making a draft card of emergency contact numbers and addresses. I was going to send thank-you notes to people who donated to the tour but instead I’ll mail postcards from Alaska. Seriously, when was the last time you got a postcard??  I hope the card and entertaining updates will make supporters feel glad they got involved.