One of my most favorite encounters so far has been with Harley in Erick, Oklahoma. 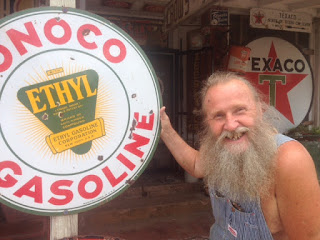 After a much-needed rest stop at the Roger Miller Museum
I drifted down the road to a building that had
a ton of colorful vintage business signs. 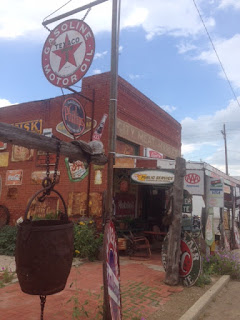 “Take as many pictures as you like,” said Harley. 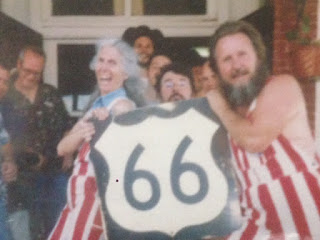 He was the owner of the shop, with was the former City Meat Market turned into a frequent tourist stop just off Route 66.

Harley was dressed in well-worn blue-and-white bib overalls. He was minus a shirt…probably cooler that way. Harley, 76, had his gray hair pulled back in a ponytail. His voice was gravelly and his personality eccentric.

I found him endearing, entertaining and lonely. 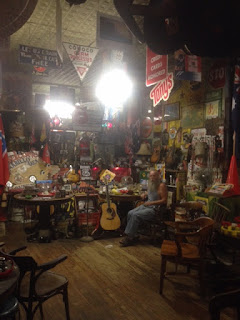 “Take as many photos as you want,” he said again as he flipped on the lights inside the store. 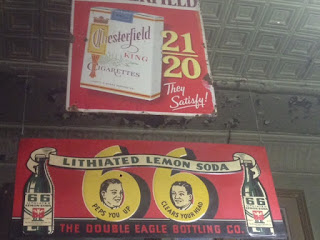 There are photos with Harley and his beloved wife Annabelle; the pair apparently drew more attention than the local museums.

“Now what are you doing on this bike trip,” said Harley. “You want a cold drink?”

I declined and Harley came back with a root beer and poured it in a frosty mug that looked like it could hold 64 ounces.

I explained the tour and then got distracted by a picture frame full of rattlesnake tails.

Harley had a lot of musical instruments mixed in with his old-school items. 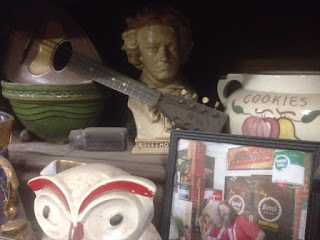 There were tambourines and markkas. “Let me sing a song for your dad,” said Harley as he strapped on his guitar. “Roll that video.” 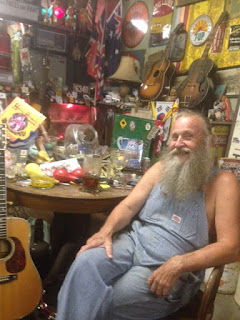 And with that Harley belted out a dedication tune of Route 66 to Al Steffes.

Some people might have been scared. I thought it was wonderful.

After the song Harley said, “You want to come over and see my house? I call it the castle-slash-sanitarium.”

How could a gal resist!

I felt a little uneasy. I could see through Harley’s shtick … But I was nonetheless a little wary so I …..

STAY TUNED TO FIND OUT…. Did I go along with him or not? 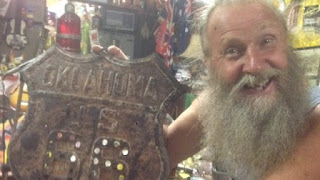