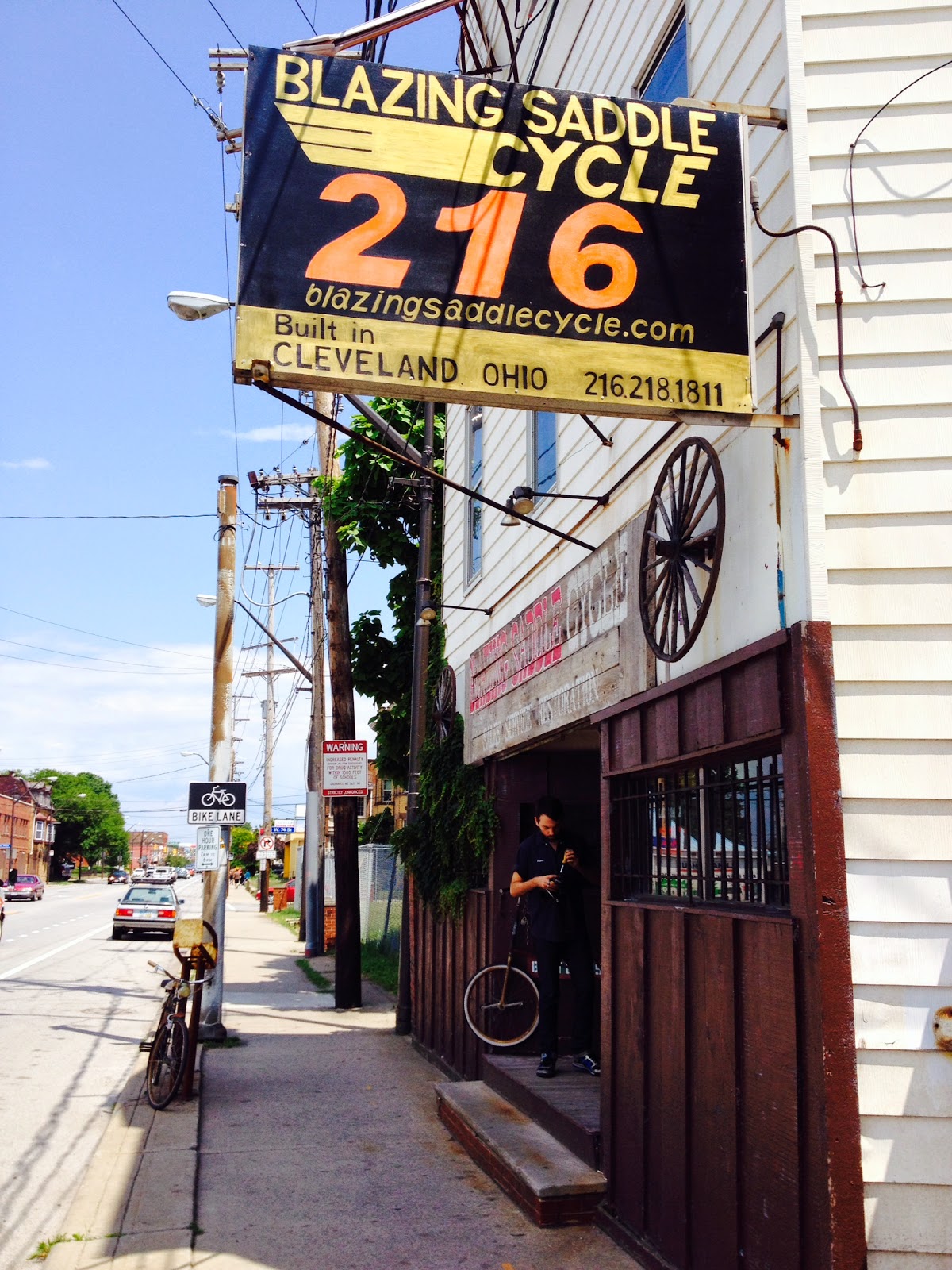 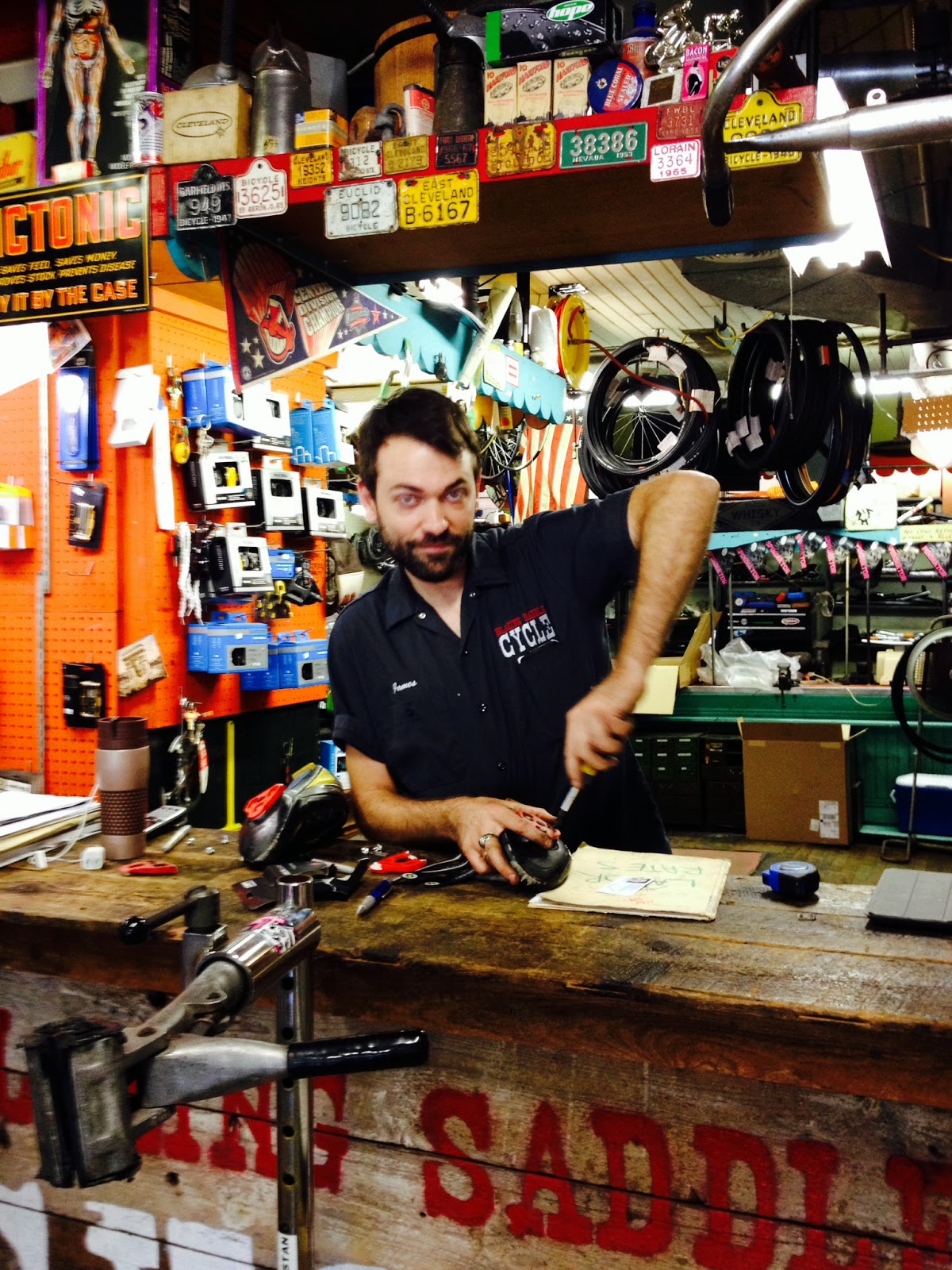 ABOVE: James Rychak from BlazingSaddle Cycle on Detroit Street – The bike store is three  years new to the location, prior to that it was a hardware store for about 30+ years.

BELOW:  Met Kiern as I pedaled out do downtown Cleveland. He hadn’t been on his bike for a while. “I’ve got to do something, my knees are a wreck and I can’t play soccer anymore,” he said.
UPDATE:
Decided to expand on this story upon popular request….
Avon Lake – Holy Spirit Catholic Church opened its door to me and two nuns
adopted me, taking me out to dinner at a local Mexican restaurant. The evening was hilarious. 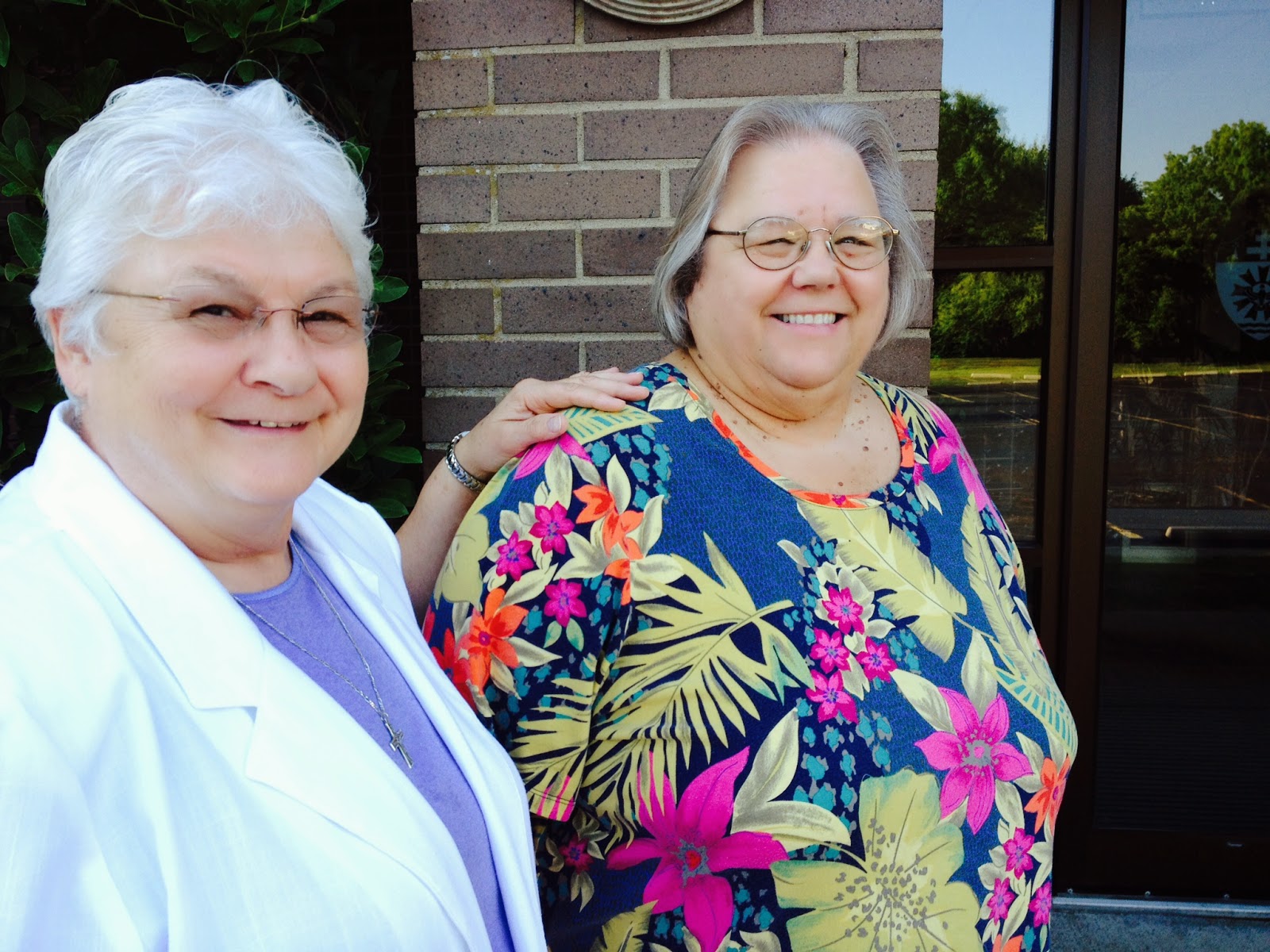 Sister Pat was forward, had a good sense of humor, and candid for someone in the religious field as she talked about having to go out of town if they wanted to go swimming because the kids from the parish would say, “We saw Sister in her swimming suit!”
Sister Connie quietly agreed saying nuns in swimsuits wasn’t a message their church was trying to send.
Both women had been at Holy Spirit Church for nearly 20 years. They said their numbers, of girls who wanted to go into a convent lifestyle, were shrinking in the states.
“Too much electronics,” said Sister Pat crunching a nacho chip.
“Africa and India,” said Sister Connie “that’s where our numbers are soaring…. but it’s a way out of poverty for those girls.”
Sister Connie then laid down some harsh reality. “When those young girls leave the church to go home and visit their families, their parents try to make them work and often push them into prostitution.  So when they come back they all take a pregnancy test and if they’re positive, pfft!,” said Sister Connie throwing her thumb over her shoulder. “They’re out.”
The waitress returns with our food and says something in Spanish; that sparks another story.
“Tell her about the time it was double-bubble night here,” said Sister Pat.
Sister Connie was being picked on, but apparently she was the fall guy in a lot of Sister Pat’s stories.
Sister Pat then jumps right into the story about two-for-one margaritas and how the waitress came around and said “uno mas.”  “So Sister, who doesn’t understand Spanish, repeats ‘uno mas’ thinking she’s saying ‘one bill’ and they bring us two more drinks.”
Sister Pat shakes her head at the ridiculous memory and downs another chip.
“Sisters whooping it up with margaritas in public is not the message the church wants to send either,” said Sister Connie as two parents pass by the table and then stop to talk, having recognized the women who work with their children.