Wednesday’s view of the office from Seward….(Wifi has been limited, so I’m playing catch up!) 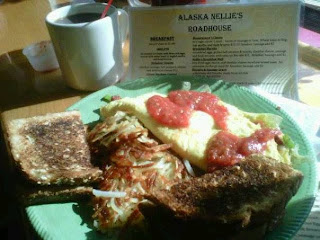 The 1970s called – they want their sign back.
Classic yellow squares in downtown Seward across from the Brown and Hawkins Mercantile, which was also the first bank and telegraph outlet in 1918., now run by third-generation owners Iris and Hugh Darling.  “Just like sweetheart,” said Iris, making sure I had it spelled right.  (Iris Darling is also one of the local historians.) 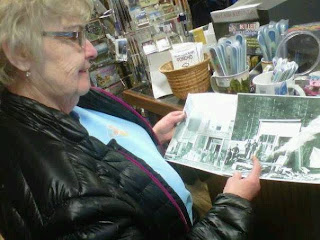 Iris Darling showing me photos from the original Brown and Hawkins Bank and Mercantile.
“That man there always wore a three-piece suit,” she said. “They all were a sweaty mess, and he was still in that suit.”