Menu
Menu
So sometimes on these tours I get myself into situations that even I can’t imagine.

I’ll give you the Reader’s Digest version. On the road for about two weeks and the weather in Oklahoma is so steamy even my socks are soaking wet.

I join Joyce and Jackie for breakfast after pedaling 15 miles from Clinton to Weatherford. We eat at Lucille’s, a well-known stop on Route 66.

“Got married when I was 16,” said Joyce. “We’ve been married longer than you’ve been alive.”

The couple knew a lot of people at the diner. Jackie was 83 and a retired truck driver. 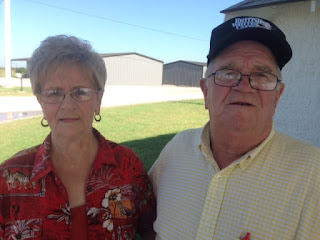 Jackie wanted to drive me in the worst way to see the real Lucille’s truck stop on Route 66. 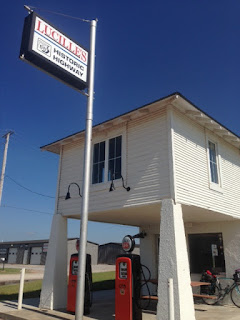 The story of Lucille raising a family during the 1940s was one of fortitude and then despair when the government shut off access to her gas station when they rerouted the new interstate.

Lucille’s was a photo op for all travelers on the Historic Route 66. 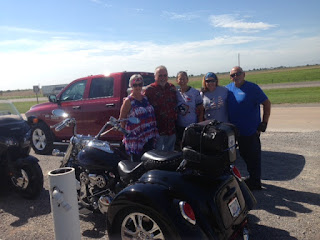 Not long after that stop I started to cramp up. Maybe the sweltery weather or something I ate. I pulled under an overpass and sat for a while. Temperatures were sunny and in the 90s.

I eventually got back on my pony and made it 10 miles to a Love’s truck stop.
Two words: Air conditioning.
I sat for a while, crunched some ice and weighed my fatigue and my options.
After about 40 minutes a man exited a van hauling a mobile home. He was in his 70s, wore a Navy hat and said, “Pretty hot day for biking.”
Next thing you know I’m in the back of the van talking to his wife, Sue, and they’re giving me a safe lift to Oklahoma City.
Sue and I talk about books, the demise of media and the adventures of touring.
The couple drop me off in downtown Oklahoma City, with its skyscrapers and traffic lights.
I don’t think I’m going to find a church in the vicinity so I roll into the lobby of the Courtyard Marriott.
It’s located next to the Chesapeake Energy Arena where the NBA Oklahoma Thunder play.
I ask the clerk, Josh Allen, for help and directions to a youth hostel.

Josh asks if I would stay if he could make a night at the Courtyard affordable.

That definition of ‘affordable’ is something that’s probably not going to be in Josh’s wheelhouse.
And you are not going to believe what happened next…. 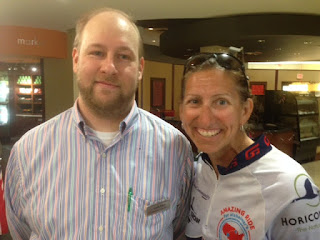 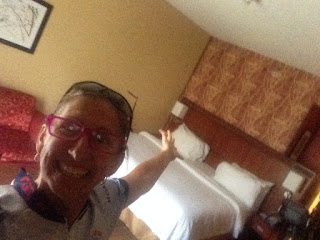 This is me in my room at The Courtyard in downtown Oklahoma City.  Let’s give it up for Josh Allen.

He totally was excellent customer service. He got me a bottle of water and a banana and I was getting out credentials and ID and going on and on about the tour and all he said calmly was, “I believe you.”

I must have just looked and smelled like a total mess; I KNOW I wasn’t their normal clientele… and Josh just helped.

Let’s hear it for Josh!