Menu
Menu
SOLDOTNA – Churned out 26 recreational miles today pedaling up the coast about 7 miles to the small town of Kenai. 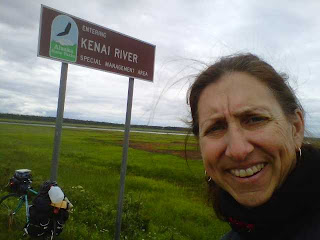 That town’s famous for its Russian Orthodox Church, The Holy Assumption of the Virgin Mary, which is dated to 1881 and had a chalky blue onion-shaped dome on top of the cupola. 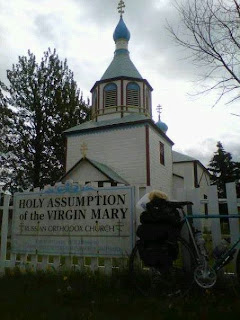 I spun back to Soldotna for a bunch of appointments; one included a personal tour of the Soldotna Historic Museum.
My guide, Marge Mullen, was an original homesteader having settled in Soldotna in 1947 when she was 27 years old. 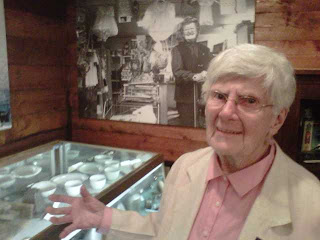 “I just turned 93 years old the other day,” said Marge. She moved around with ease and was dressed comfortably in a collared pink button-up blouse, matching pink earrings and white walking shoes.
“I feel good but I feel 93 in the mornings,” she said, wasting no time with small talk launching into the history tour.
We stayed indoors long enough to review the flag of Alaska which was designed in 1927 by a 13-year-old orphan, Benny Benson.. “It’s the Great North Star and the Big Dipper on a deep blue background representing Alaska’s sky and forget-me-not flower,” said Marge describing the flag. 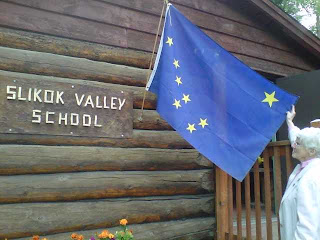 “Benny won a watch and $1,000 and he grew up to be an aviation mechanic,” she said.
We hopped around to a couple other displays including an Eskimo cookbook opened to a page on how to make homemade ice cream. There was also a mock up of a deed from 1867 when William H. Seward, Secretary of State, on behalf of President Andrew Johnson, purchased Alaska from Russia for $7.2 million.
“That ended up being about 2 cents an acre,” said Marge. Alaska became a state in 1959.
We continued the tour outdoors, walking from cabin to cabin. Marge pointing out flowers on the forest floor. “That’s an imitation dog wood – the white one with four pedals,” she said.
As we entered one of the homesteader cabins I was shocked how clean the men kept it. “You sense a woman’s touch do ya,” said Marge dryly.
I noticed Marge appreciated the relaxed nature of the tour;  she took my sarcasm in stride, but it threw her off her rehearsed speech.
She’d pick up every time saying, “I have to say one more thing” ….and she’d find her groove again and move on to her next display.
“This Montgomery Ward catalog was entertainment and extremely useful to homesteaders,” said Marge pointing out the $3 bargain for a nice pair of girls pants. 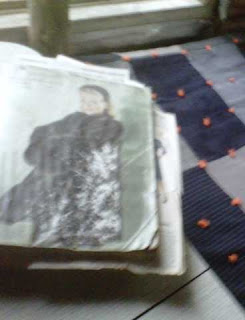 Old Montgomery Ward catalog
“I remember when my husband and I first settled here we’d rip Time magazine in half – we were so hungry to learn what was going on in the world.”
“There were days we’d order 100 chicks in a box – they’d come delivered in little compartments,” she said, smiling.
Marge commented and gently touched items as she went. “These curtains were made from feed bags, this Coleman lantern was key to survival and you were uptown when you got a Maytag ringer washer,” she said.
“After you took your supplies out of the box, you used the box for shelving.”

“The simple bucket was also important to homesteaders; it could haul items, bring in fresh water and we all drank out of the same ladle and never got hydrophobia,” said Marge.
You could tell she had frontier spirit; no time for nonsense, weakness, or dawdlers.
A volunteer at the Historic Museum the last seven years, it was interesting to note while Marge was telling stories about the original homesteaders she’d refer to them as ‘he was a good friend of mine.’
I felt privileged to be hearing the stories first hand from someone who WAS actually there.

FOLLOWUP:  Got this lovely email from Marge’s daughter shortly after this visit…

“Judy – You and my mother, Marge, had a lovely visit at the Homestead Museum in Soldotna today. She enjoyed hearing about your adventures and your writing efforts. If you need a place to stay on your way back through Soldotna, we would like to offer our spare room, in exchange for just a few more stories. ……………Homer is such a beautiful place and the people are so interesting that we may not see you for weeks!” Peggy Mullen

Side notes:
– My most valuable pieces of clothing have been my earmuffs, my neck gator and my XL Hefty garbage bag.
– Spent the night at College Heights Baptist Church in Soldotna. I owned the floor in the nursery. It was a four-star establishment. I slept like a baby.
– Gas is up over $4.09 for a gallon of regular unleaded.
– I haven’t read a paper in four days. It’s an indescribable feeling that is not fun at all – I’d much rather know what’s going on and Facebook just doesn’t do it for me.