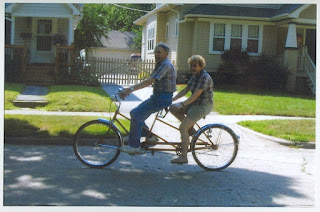 I wrote this story in 2006 when my parents had a little more dexterity and Evel Knievel enthusiasm. Even back then I was looking for ways to incorporate exercise as a method of slowing Alzheimer’s.

In an effort to prepare for September’s bicycle tour I’ve mixed in a bit of unconventional training this weekend pedaling a tandem, alone, from West Bend to Milwaukee.

I bought the bike for my parents and it’s a bit of an antique.  A chipped license plate sticker from the City of Milwaukee is wrapped around the main frame; it reads “Expires April 30, 1979.”

The rusty orange-colored single speed has coaster breaks and weighs about 75 pounds. Pump up the tires and the rig glides, like an anvil on Flintstone wheels.

Shy a vehicle large enough to haul the Schwinn Twinn, I decided to move it myself.

I set out at noon on Saturday.  The tour, which normally takes me two hour on my 21-speed road bike, took about three hours.  By the time I made it to the Whitefish Bay Public Library I was ready to apply the booster rocket.  My six-year-old nephew Robby climbed on board and we pedaled the remaining 10 blocks to my parents’ house.

After the surprise was unveiled I handed the ‘orange blossom special’ over to my 83-year-old father. He climbed on board, a bit unsteady.

The cheers of eight grandchildren were mixed with the low rumbling, yet vocal, concerns of my siblings.  My Dad is obviously aging; his dexterity is antiquated, as is his memory.

I had attached a small compass labeled “GPS” on the handlebars.  “Grandparent Positioning System,” I told my sisters with a grin.  My siblings found little humor in the device.

I also bought my parents helmets.  “Old people don’t hit their heads, they break their hips,” said my younger brother John.  I told him he could be in charge of finding hip pads. He instead ran inside to hunt for the parent’s insurance policy.

After a brief solo spin, my Dad expressed confidence that “Mother” could try the back seat.  We needed to get wrenches and lower the orange and white seat for my Mom who is 5-feet tall and constantly shrinking.

After teetering start and some wary glances, my sisters picked up their children, moving them to the safety of higher ground.

My sister Nancy, the nurse, yelled for the parents to wait while she went inside to grab the phone.

Nancy said she just wanted to be safe.  She positioned herself staunchly by the curb and dialed 9…1….  Her thumb hovered over the remaining ‘1.’  FEMA would be impressed with her dedication to emergency preparedness.

Stumbling to a start, the Steffes Express slowly built steam.  They looked like two circus bears rolling down the sidewalk.  My Dad riding like he was sitting atop his old Farmall tractor, my Mother, her body hunched over, clutching the sparkly plastic handle grips with her seat completely engulfing the orange saddle.  “For better or worse,” she whispered as she passed. It sounded like a desperate reminder of how she got herself into this situation.

My brother gave up on his search for insurance policies and was now racing to take the training wheels off his daughter’s two-wheeler and transfer them to the tandem.

Moving with confidence down the block, the parents turned back into the driveway grinning and sweating.  “Give us a couple of days and we’ll be pulling even, like a good team of horses,” said my Dad who grew up on a farm in St. Cloud.

Inside the house kids played, we drank lemonade and my Dad asked more than once how I got the bike and how much he owed me.  “It’s a gift dad, from the kids,” I said, feeling his reluctance to accept such a treasure.

My Dad was the one who sparked my interest in bikes. When we were kids he built a ‘baby seat bike.’  It was a blue, lady’s Schwinn with four bicycle seats mounted to the frame; a seat for each little girl.  One seat in front of the handle bars, one wedged behind the handlebars and two seats behind the driver.  The caboose was a piece of wood, cut to look like a bike seat but shy any cushion.  The kid in diapers was the one who got the splintery assignment in the back row.

Off we’d go on a Saturday afternoon, my Dad in his dark socks and fishing cap and the girls with smiles and ponytails for protection.

I never remember falling or crashing; we had complete trust in the driver.

We were pulled over once by the cops in Shorewood.  “The nerve of you, breaking all the rules and riding RIGHT IN FRONT of the police station,” scolded the officer.  As the story goes, my Dad couldn’t figure out what rules he was breaking and simply pedaled away telling the dumbfounded officer, “arrest me.”

As the tandem party wrapped up and everyone packed to leave, my Mom ran to show us her latest discovery.  She came back with a DVD.  “Have you guys seen this??” she said holding up the video box for the 2004 movie Napoleon Dynamite.  “This is the best movie,” she laughed.

My brother shook his head and sighed in disgust, “I better find those hip pads soon before they decide to take that bike over some sweet jumps.”