July 11, 2019 – Lebanon, IN -You know  you’ve fallen into Mayberry when there is a Farmers’ Market on Monday evening across from the county courthouse and an IGA grocery on the corner. 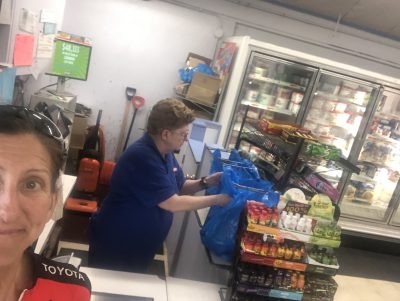 Two clerks dressed in dark blue IGA shirts stood at the end of their checkout lines watching customers come through the front door.

Store aisles were narrow and the selection varied with necessities only. I asked a man In passing if he knew whether the store had fried chicken.

“We have a KFC in town,” he said. “They have chicken here you can take home and make.” 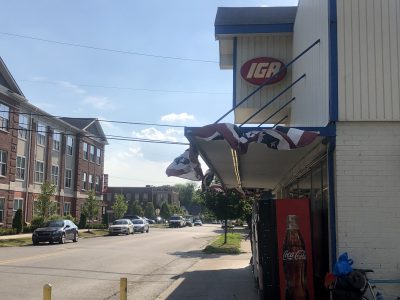 Another treasured moment on tour.

Most would simply drive through Lebanon, Indiana but for one night on a bike I called it home.

A shout out to St. Joseph’s Parish for giving me a safe space for the night and the clerk at the IGA who called out MARY at The Cubboard as the place for the best breakfast in town.

“Mary was voted number one,” said the clerk.

There was a “you betcha” and an “okeydokey” thrown in the conversation as well.

I wish I could package this environment and bring it home.

The Cubboard was a little, old-fashioned diner located in the back of a pharmacy. There was a small sandwich board sign on the sidewalk listing the daily specials.

The clerk/pharmacist behind the counter offered a “mornin” as I walked in.

Past the gallery of Hallmark cards and kitschy collectibles I followed the scent of bacon to the back.

It was everything you could have imagined…. a land that time forgot.

The board of directors with suspenders and hats supporting their favorite farm implement manufacturer held court on the table to the right. 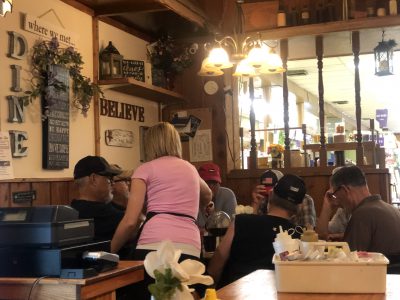 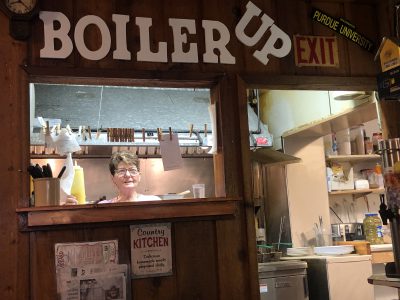 There was a bar rail to sit up front and watch the waitresses scurry about, and there was the famed Mary in her perch behind the grill filling orders hung on paper tags. 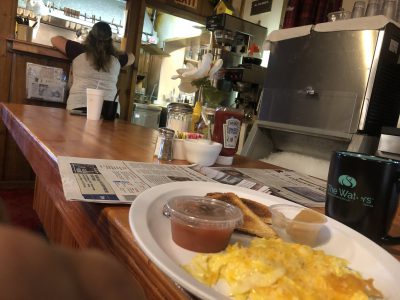 “Were those eggs exactly how you wanned um?” said Mary. 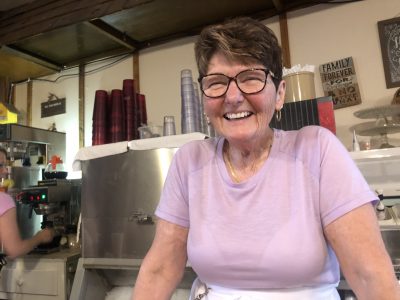 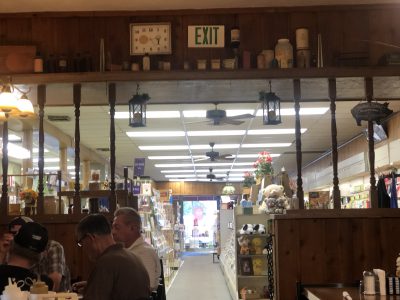 She was a gem. All smiles, easy-going country attitude. Sounded like she was breaking in a new waitress and she did it with patience and sound advice. “You’ll get the hang of it,” she said, supportively knowing it would be the board of directors that would really train her.

With coffee, two eggs and toast my bill was less than $5.

If you’re ever in Lebanon, Indiana, The Cubbard is a must.

Indiana is not known for being too biker friendly but the Farm Heritage Trail was a great ride and a good way to cover some miles north under a canopy of trees and away from traffic.

Highway 52 was another story and thanks to Mother Nature’s furnace I only managed 43 miles up the road to Lafayette.

Spent the night at my first Airbnb. Shout out to Ryan who hosted me at the fabulous Kip’s Place in Lebanon. So far it’s been the best stay of my whole vacation.