Menu
Menu
ANCHORAGE – Touchdown at the Ted Stevens Anchorage InternationalAirport in Anchorage was at 3 a.m. Saturday following a five-hour flight from Denver.  The adventure included an unscheduled one-hour delay because of severe cloud-to-cloud lightning, an impromptu refueling and a sanity-testing, 59-minute wait on the tarmac while 30 other planes (also delayed) queued up ahead of us.
Ina in Baggage Claim at the Anchorage airport was there to help with some conversation therapy at 4:30 a.m. offering an easy bicycle route out of the airport.
She also was ‘Alaskan nice’ and invited me to breakfast after she got off work at 7 a.m. 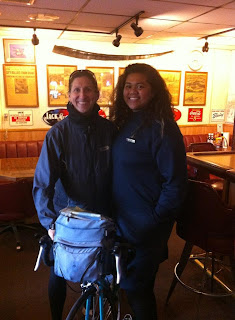 We met at Gwennie’s Old Alaska Restaurant which was the perfect non-franchise venue of history mixed with genuine “way-up-nort” hospitality and huge portions of everything.
Their slogan should have included something like ‘enough food to feed a mining camp’ or ‘a to-go box with every meal.’
Located on Spenard Road about two-miles north of the airport, I pedaled over and met Eina, her husband, Lou, and three-year-old son.
Ina, 26, was Samoan. She was born in Hawaii, moved to Houston, TX in grade school, visited Alaska after high school and stayed after she met her husband, who was also Samoan.
The layout at our table included little room for condiments much less bad manners because the buttermilk pancakes were as big as a baby’s head and the waffles were the size of a checkerboard. There were heaps of scrambled eggs and (Did I mention what happens to Santa’s engine during the off season?) reindeer sausage.

Actually, I passed on the reindeer sausage when the waitress refused to budge on the special side-order price of $13.  (I didn’t want the whole deer – just a link.)  She stood her ground, so I figured I’d come across a more accommodating morsel somewhere later down the road. No reindeer sausage for you!

Gwennie’s was a two-story restaurant filled with Alaskan heritage. A giant stuffed-bison head overlooked our table – I must say it was a little too close for comfort.
There were gold mining pans and newspaper clippings on the wall that included details of the former owner who ran a gambling place /whorehouse at the site.
From 1972 – 1981 the Pagoda was a quiet tea room on the first floor with serious revenue generated on the second.

A framed article at the entrance said the working girls ‘didn’t look like typical prostitutes. They wore Sorrel boots and a big jacket over jeans and sweatshirts. They really don’t get too dressed up for the job.’ 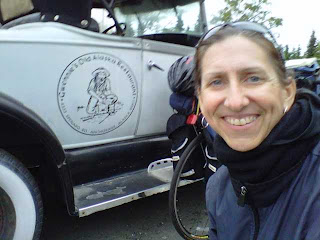