Menu
Menu
Hope has a feel of Mayberry in a wooded setting. The roads through town aren’t paved, but packed hard with hand-painted signs at the three intersections. ‘More of Historic Downtown’ reads one sign, with an arrow.
Some street signs are missing, but with only six streets in the historic downtown it’s not too difficult to navigate.
The post office is up the road. Linda has been working as the full-time post master the past 35 years. The building has a ramp to the front door; hours are listed in white print on the window and when I walk to the front counter I can see Linda in the back yard watering plants.
“This is the only post office within 25 driving miles,” she said. “The government had been threatening to cut back our hours – but it doesn’t look like that’s going to happen.”
I’m envious of Linda’s old-school postal apron. 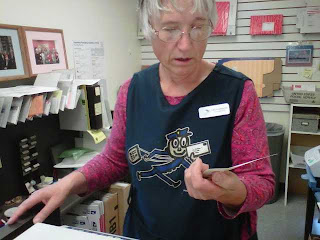 Linda
If I had made my rounds earlier, I would have been more impressed with her quilting skills.
Linda crafted a huge quilt for the upcoming town raffle; proceeds help finance the independent community library and Sherritt Fine Art Gallery and Gifts.
Apparently the other night while laying out the quilt at the social center, they found a pucker. The quilt wouldn’t lay flat and Linda would have none of it.
She’s busy taking it apart and counting the days before the mid-July raffle.
Had a quick bite to eat at the Discovery Cafe before heading to the Hope History Museum where it was all about the first Alaskan gold rush 1894 – 1896.

There were lots of out buildings on display with 12 x 16-foot cabins built with joined, dovetail-style corners by miners of Swedish origin.
Meals for the gold miners included moose stew, ptarmigan, mountain sheep, goat and bear. There were two large upstairs rooms in one cabin. The electronic voice-box narration said 30 men slept in those two rooms and snored in unison.
And the answer is ‘Yes’ if anyone is wondering – I would have slept there.
One of the better Alaskan gold-mining stories coincided with a painting of a man, Nathan White, and his pet brown bear he trained to pull his sleigh. 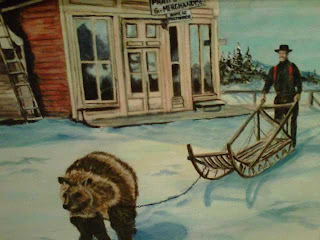 The painting dated to a photo from May 1917 and museum volunteer Diane told the story about how “a bear is cute as a cub but as they grow they’re like a teen and play rough.”
Nate’s wife, Babe, didn’t much care for their family pet. One day when Nate left, Babe went to the outhouse and the bear trapped her inside. Finally, someone at the pool hall heard her screams and went to let her out.
Babe marched to the cabin, got a shotgun and made stew out of their pet. And, ‘no,’ Diane could not confirm whether the bear rug on display was the victim of Babe evening the score.
Spent a good deal of time at the community library, which was a beehive of activity (read- networking center/gossip hot spot). It was basically a party line telephone; mostly ladies came through the front door and exchanged information. There were updates on someone’s father passing, a woman got a new dog and told a neighbor what for and to keep their dog tied up, and of course there was the drama about the pucker in the quilt.
Across the way at the local Art Gallery visitors came and went. The latest ‘eccentric’ person to visit was a queen from another country. “A big saucy woman,” as she was described, who had large ruby rings and gem-filled bracelets, and most fascinated with Tweety Bird and Sylvester the cat.  As the story went, she had key chain fobs of the Looney Tune characters made into a bulky necklace.
The queen was impressed with the local art, especially the brass pieces that ranged in size from a small 3-inch figure of a wolf to a much larger tabletop display of two otters surfacing from the water.
All, apparently, were WAY too small for the queen.
I’ll assume that story, Queen in Hope with Tweety Bird obsession, would be the height of discussion at the community library for a good two weeks.