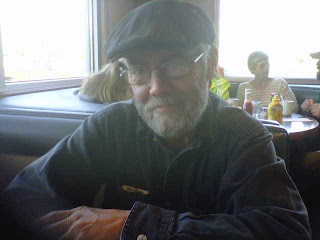 Nice breakfast this morning at the most popular place in Fairbanks – Sam’s Sourdough Cafe.
Swung into Dave’s booth.  He was sitting alone, looking like he was waiting on food.  “I tell you, the Parks Highway is the way you want to go,” he said.  Dave was a Harley guy and retired career Air Force.  He wore a classic Harley cap and talked about a close run-in when a moose crossed his path as he was riding in the rain down near the Klutina River in AK.
“I’m originally from Wisconsin,” said Dave.
What were the chances?
“Oak Creek,” he said.  “If you haven’t noticed yet, everybody up here is pretty friendly.”
Dave was right – the hospitality especially stood out at every train stop. When we pulled into each depot, EVFERYBODY was waving and smiling.  Kind of a mix of Twilight Zone meets Smallville, with a Steven Spielberg twist.