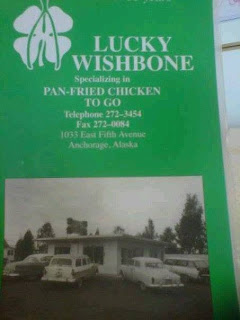 Final day in Alaska and having lunch at the oldest diner in Anchorage – the Lucky Wishbone.
Established in 1955 by George and Peg Brown, who packed up the kids and dog and moved from WISCONSIN to Anchorage.  The couple bought land at the edge of town (2 miles out of town at that time; his friends said he was crazy – nobody would drive that far) – 5th and Karluk St. and built the restaurant – t’s been there ever since.  The restaurant has dine-in and a drive-thru, and is known for it’s fresh chicken, lean hamburgers and long-term staff. 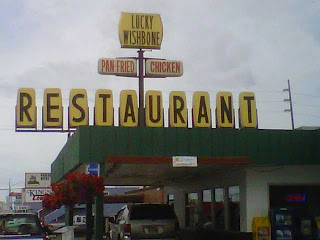 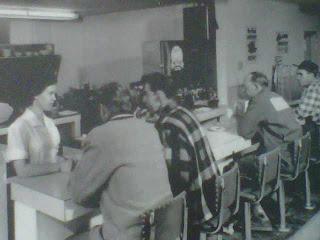 The initial restaurant was small; there was inside seating and a drive-thru.
George said he hated the drive-thru.  “When I bought out my partner, I was going to close it up, but then I looked at the books…well, as you can see, I kept it.”
George has heavy square glasses that are tinted yellow.  It’s a look that hearkens to his days in the Army Air Corps.  There’s a vintage photo of George in uniform on one side of an old grandfather clock (see below) behind the waitress station.  On the other side is a 1950’s photo of his wife, Peg. 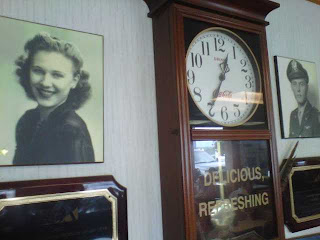 Peg (L) and George (R) Brown
Owners of the Lucky Wishbone Restaurant
Originally from Wisconsin
“When I met her, I was smitten, ” said George. “She died five years ago and on her headstone it says ‘Beloved mother and a hell of a partner.'” The pair had been married 67 years. 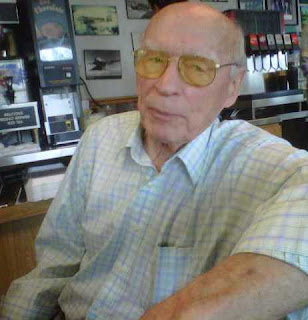 George Brown (age 91)
“Came here from the small town of Hager City, Wisconsin; it’s across from Red Wing, Minnesota,” said George.  A green and white Hager City sign hangs on the wall across from the table where George sat, talked, was interrupted, and talked some more.  “Put the wife, kids, and dog in the car and came up the Alaskan Highway because I needed to make some money,” he said. 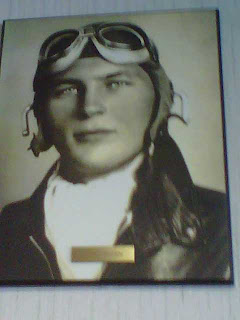 WWII pilot Bill Brooks (97) was eating at the restaurant.
The inside of the diner is filled with memorabilia from local pilots and the neighboring Merrill Field.  George flew P-40’s in WWII.  “Transport planes in the China, Burma, India theater,” yelled George above the growing din.  All the tables at the Wishbone are now full.  There’s a pickup in the drive-thru and a party of four waiting at the door. “Here’s my good friend,” said George, jumping out of his seat to greet Bill Brooks (see picture above) – a pilot in WWII.  His buddy, George, pays tribute to him with a much younger photo which he pointed out on the back wall.  Brooks is dressed in pilot leather with a white scarf in the photo, looking very Errol Flynn. 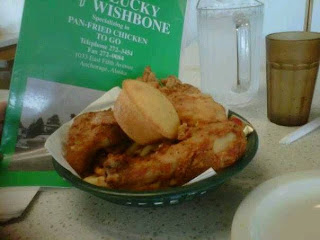